For more than seven centuries, the town of Broumov has been the administrative, cultural and economic center of the basin through which the Stěnava River flows, bounded by the border of the Javoří Mountains and the ridge of Broumov Walls. The beginnings of the town are connected with the activity of the oldest male religious order in Bohemia - the Benedictines of Břevnov.

The town was probably founded around 1255 above the right bank of Stěnava as an administrative center and the only place in the estate dedicated to trade and crafts. Drapers have always held a prominent place among the Broumov craftsmen. The drapery production soon outgrew the needs of the local market and laid the foundations for export-oriented textile production.

In May 1420 the monastery in Břevnov was burned down and the abbot Mikuláš with a larger part of the convent fled to Broumov. In June 1421, the Hussites besieged the town, but after three days of negotiations they left.

The turn of the 17th and 18th centuries, with the abbots of Tomáš Sartori and Othmar Zinke, meant Broumov's economic boom, which enabled the costly construction of monastery buildings and churches.

The abolition of feudal conditions in 1848 and the release of labor from agriculture have set the stage for industrial production. In 1856, Josef Schroll, one of the most famous canvas merchants and traders, built the first mechanical weaving mill in Olivětín and began industrializing the region. 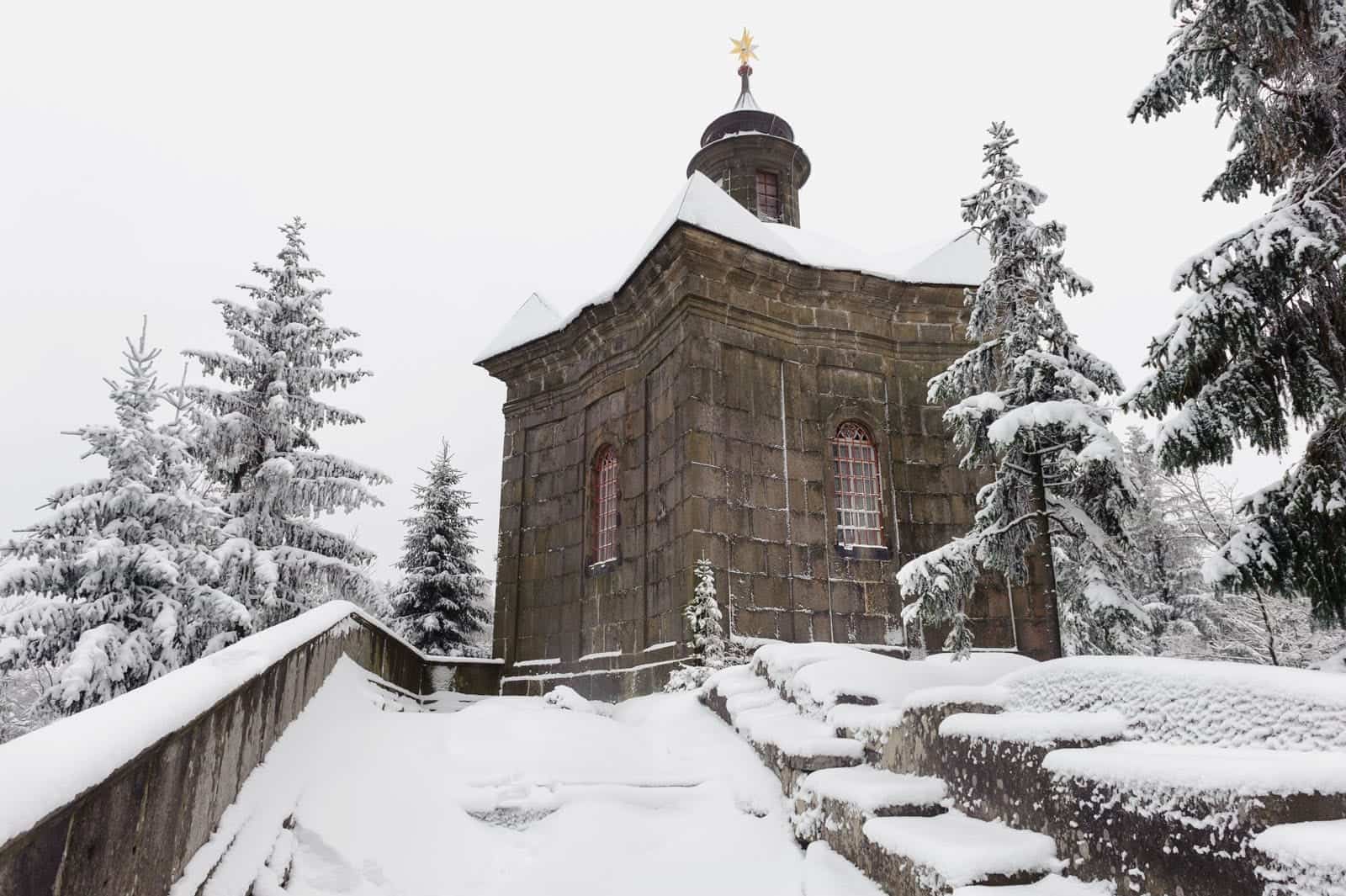 The Hvězda Chapel on the Broumov Walls 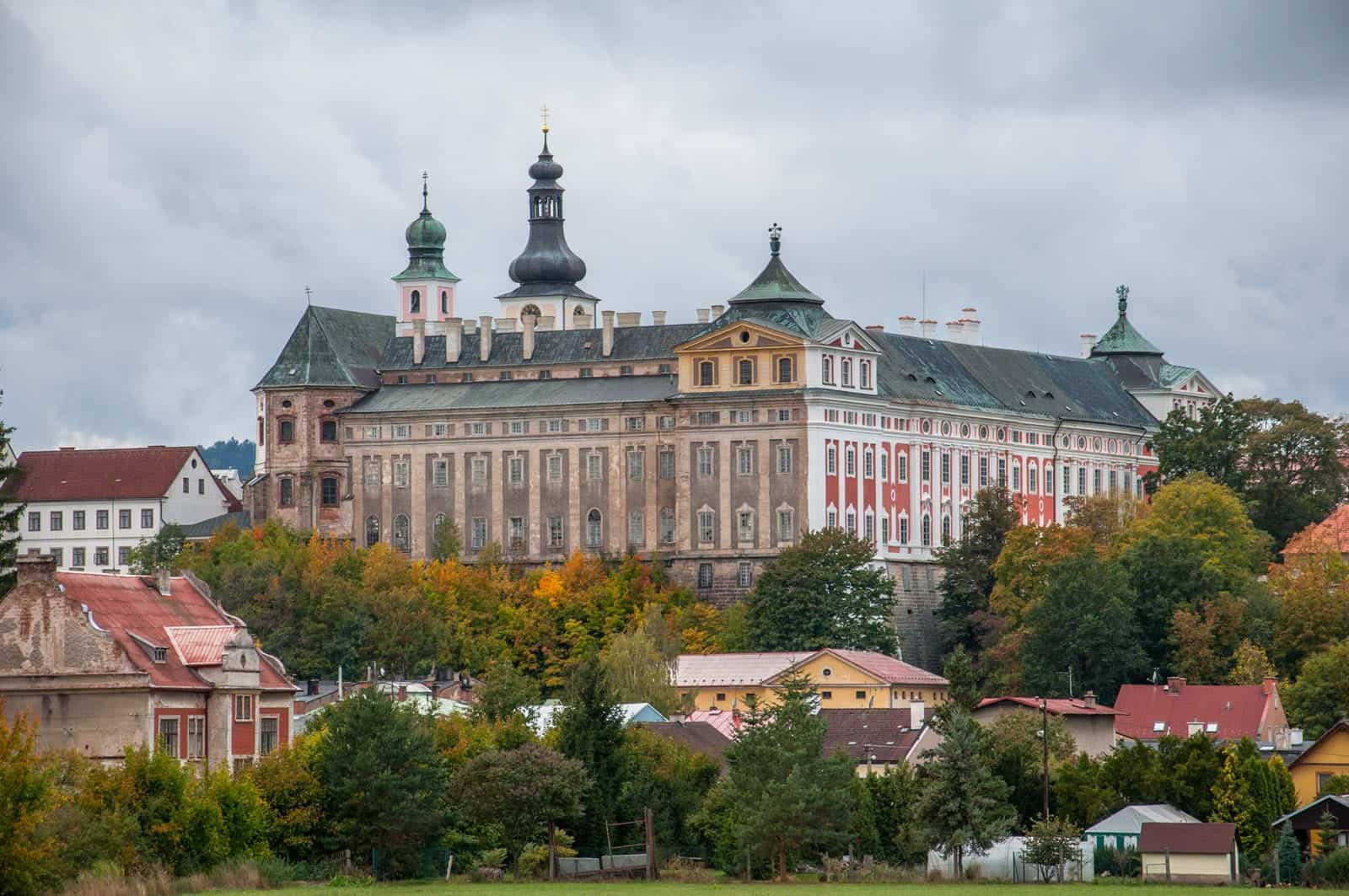 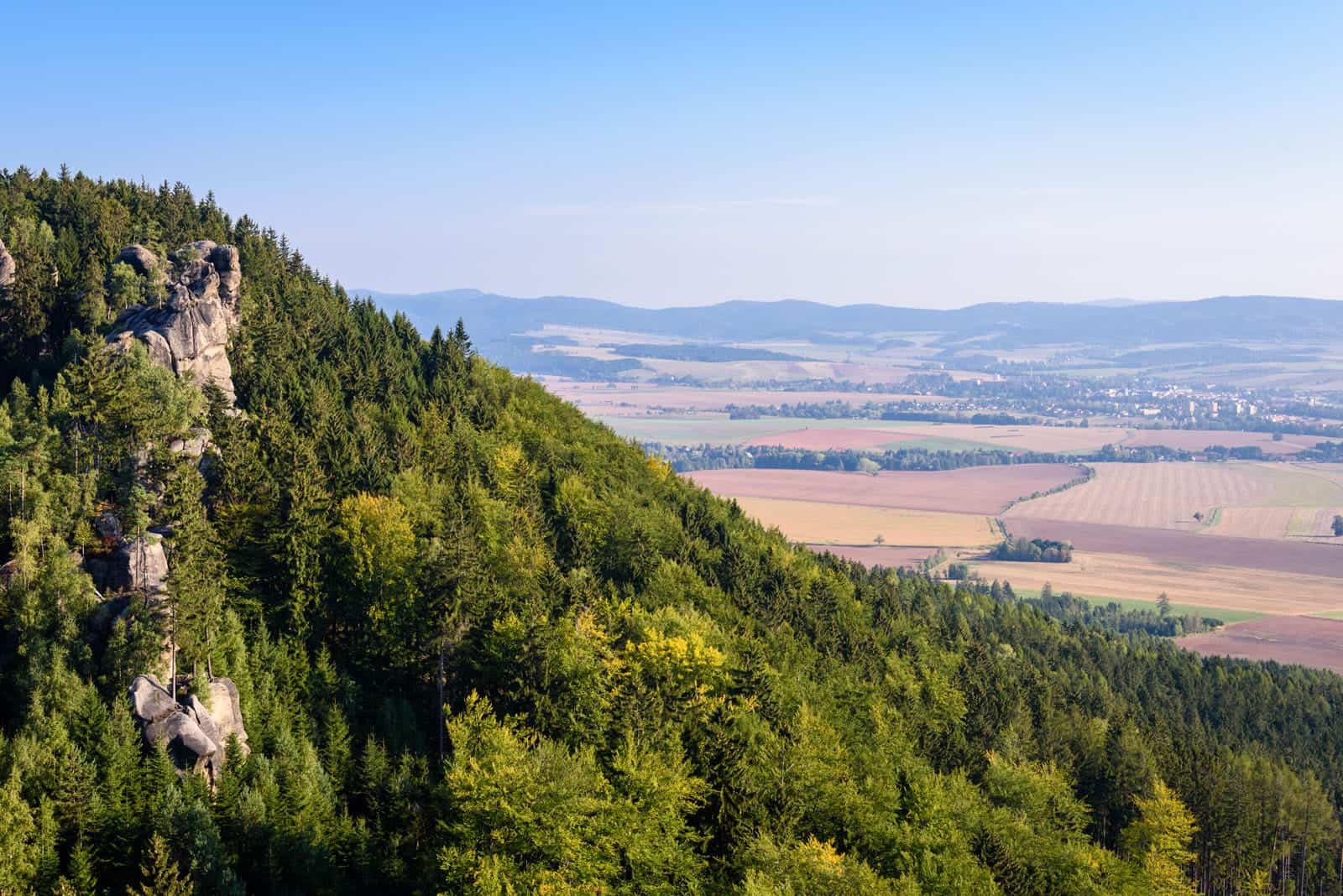 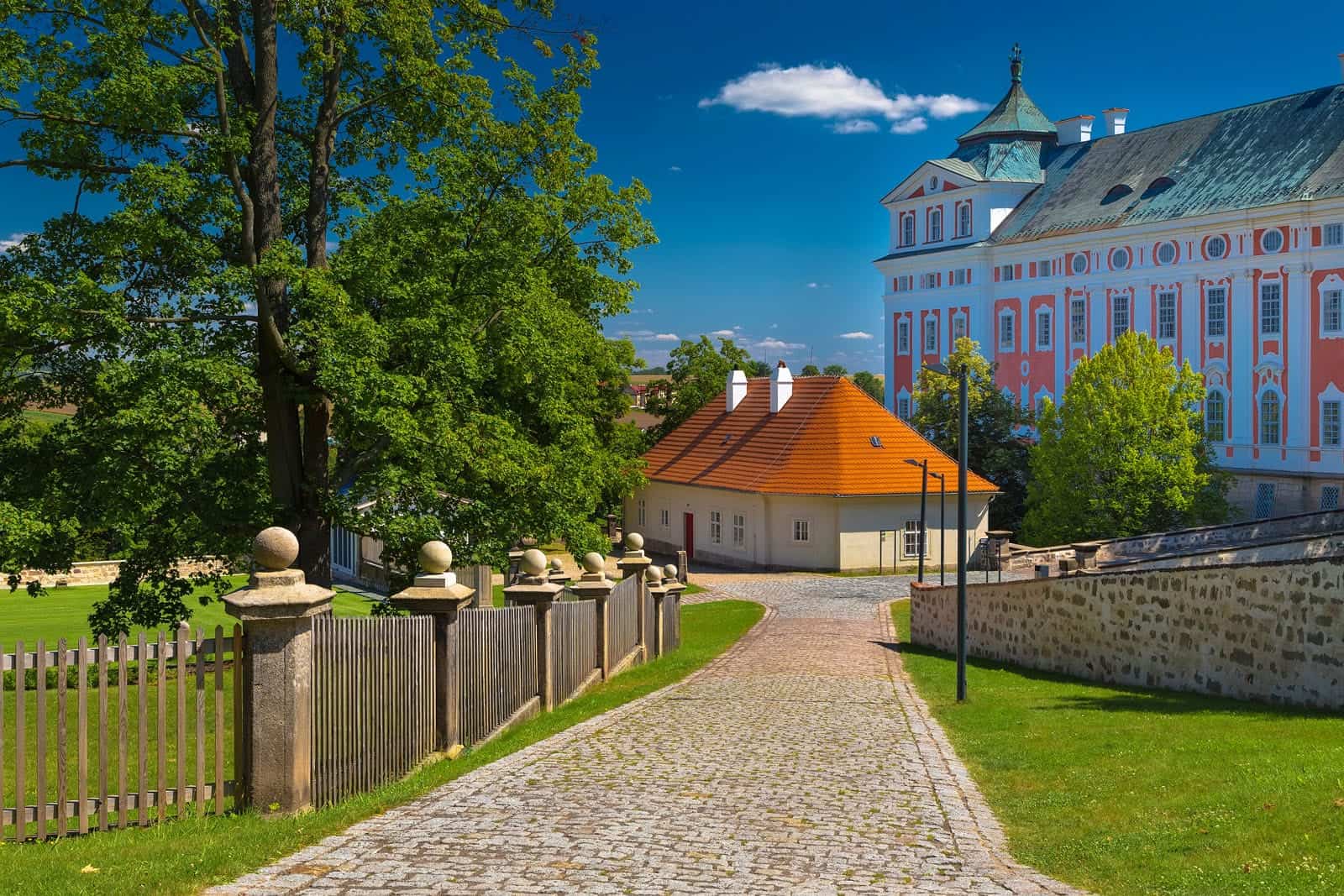 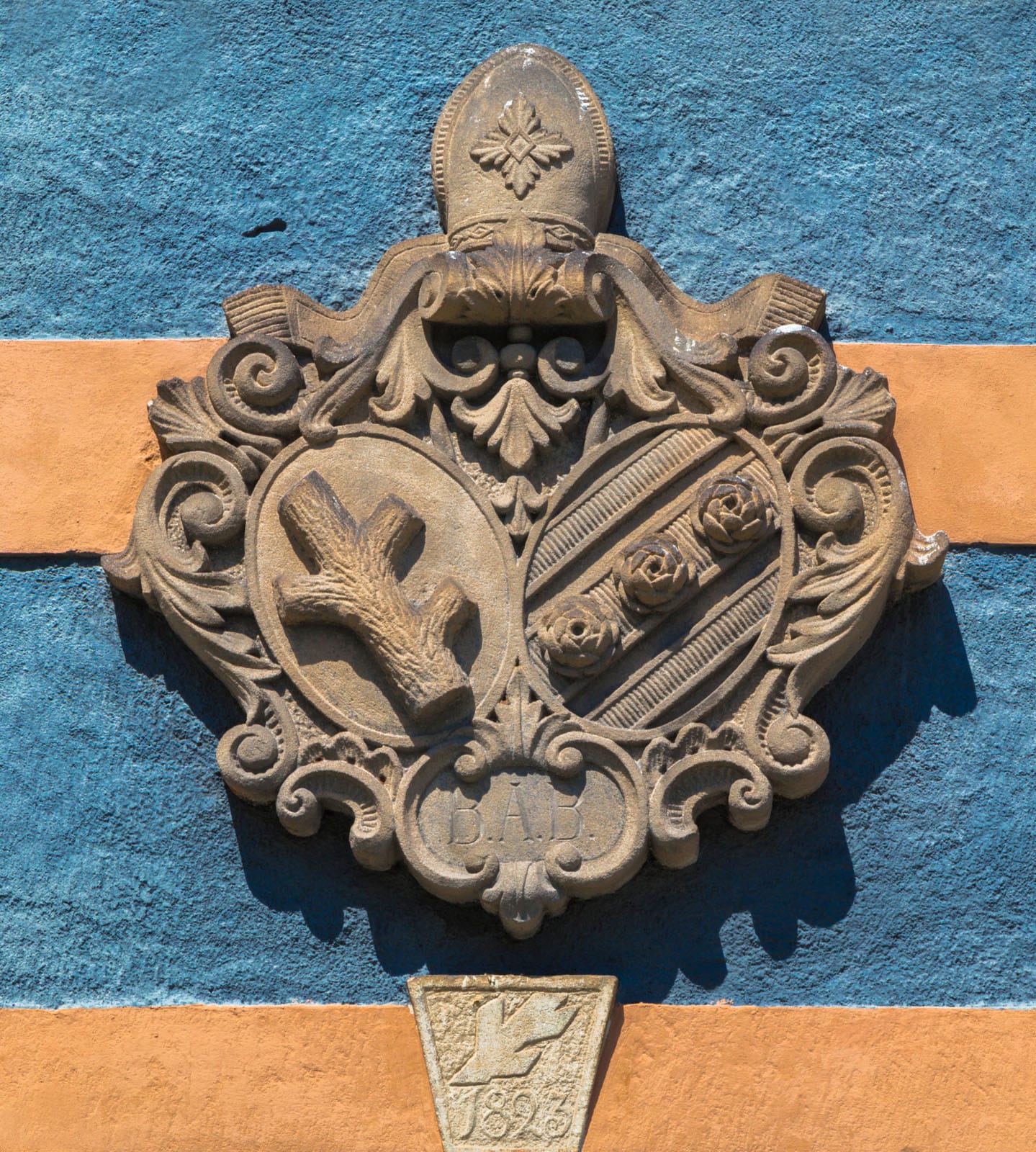 Coat of arms of the Benedictine monastery in Broumov 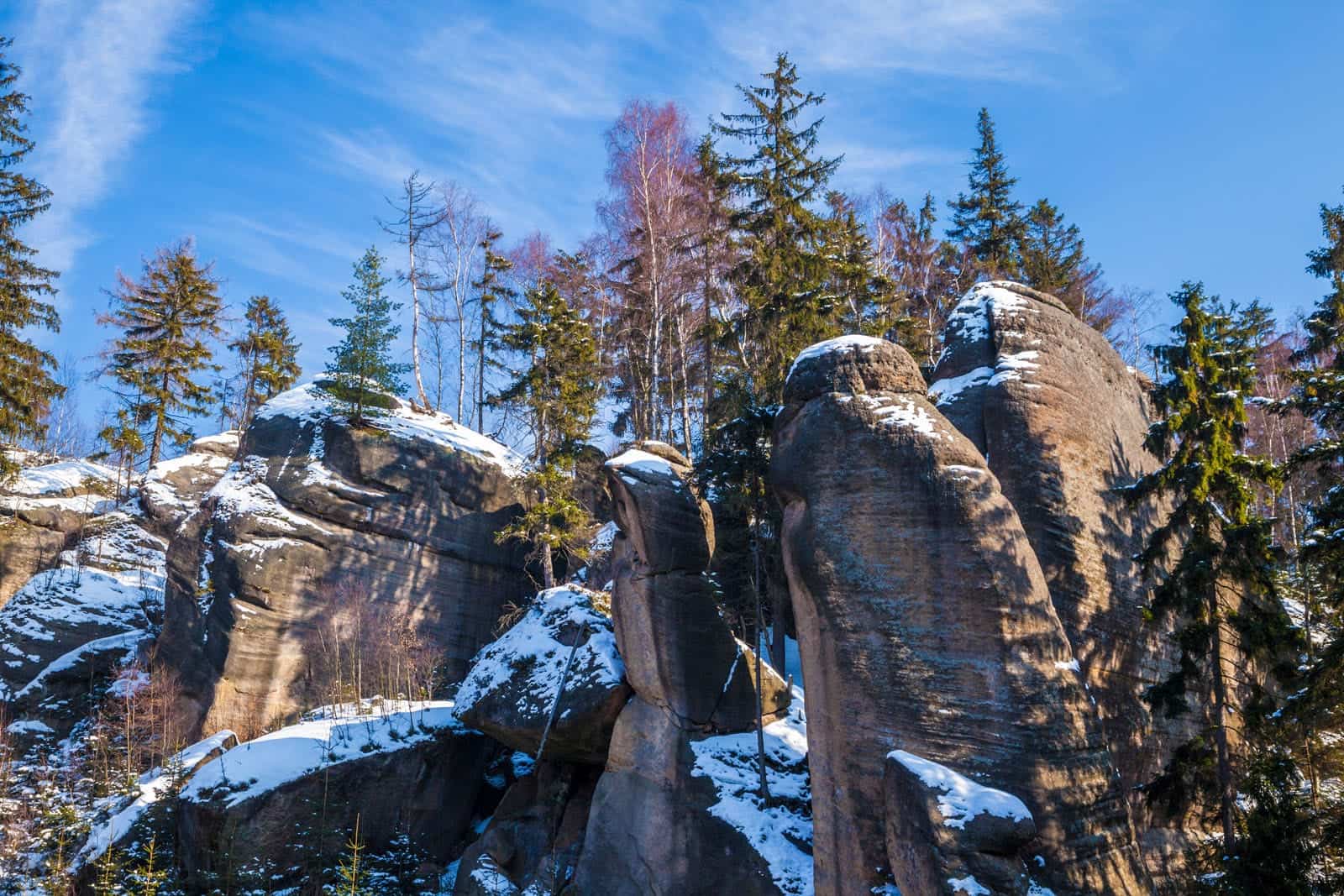 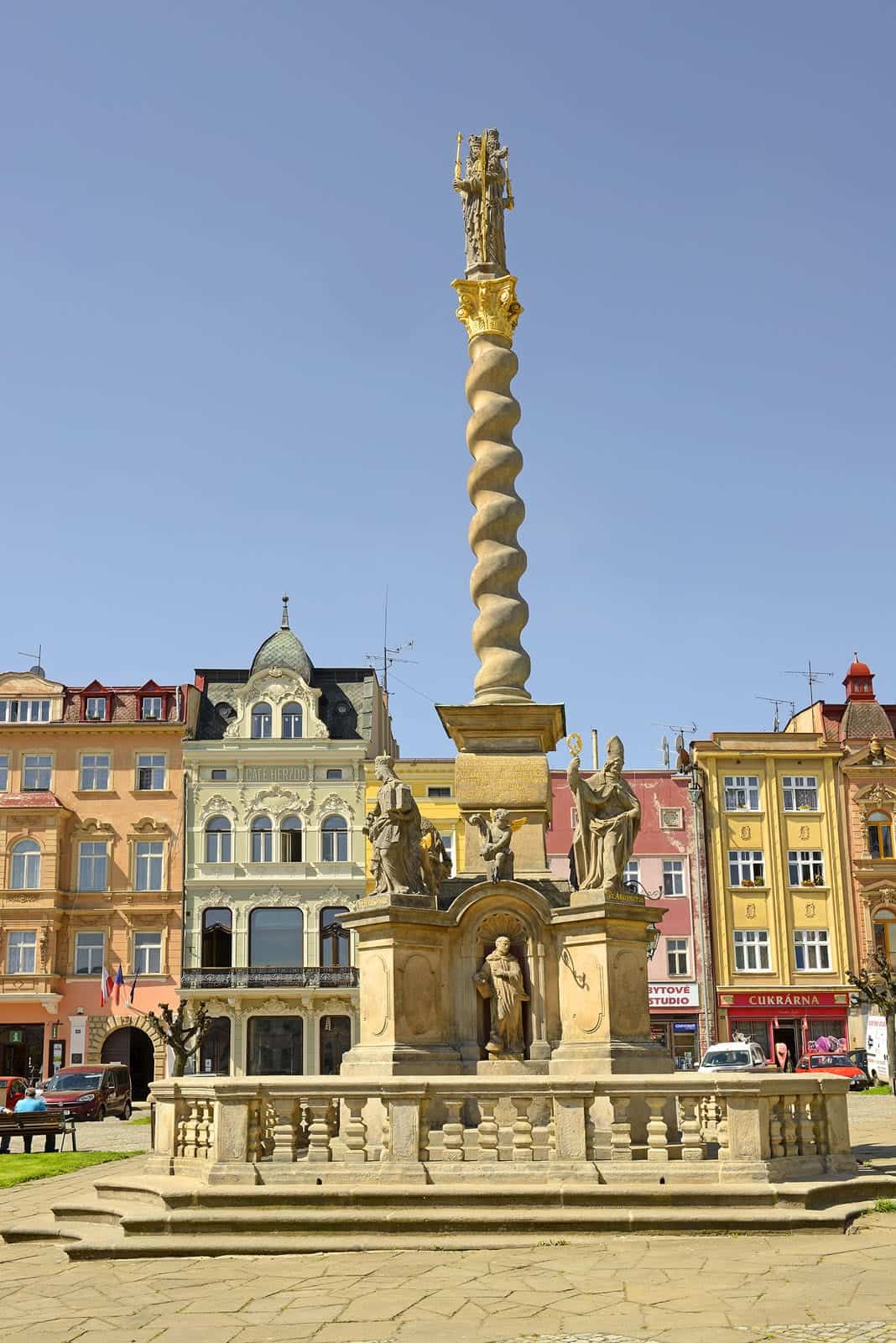 Column with the statue of the Virgin Mary in the square 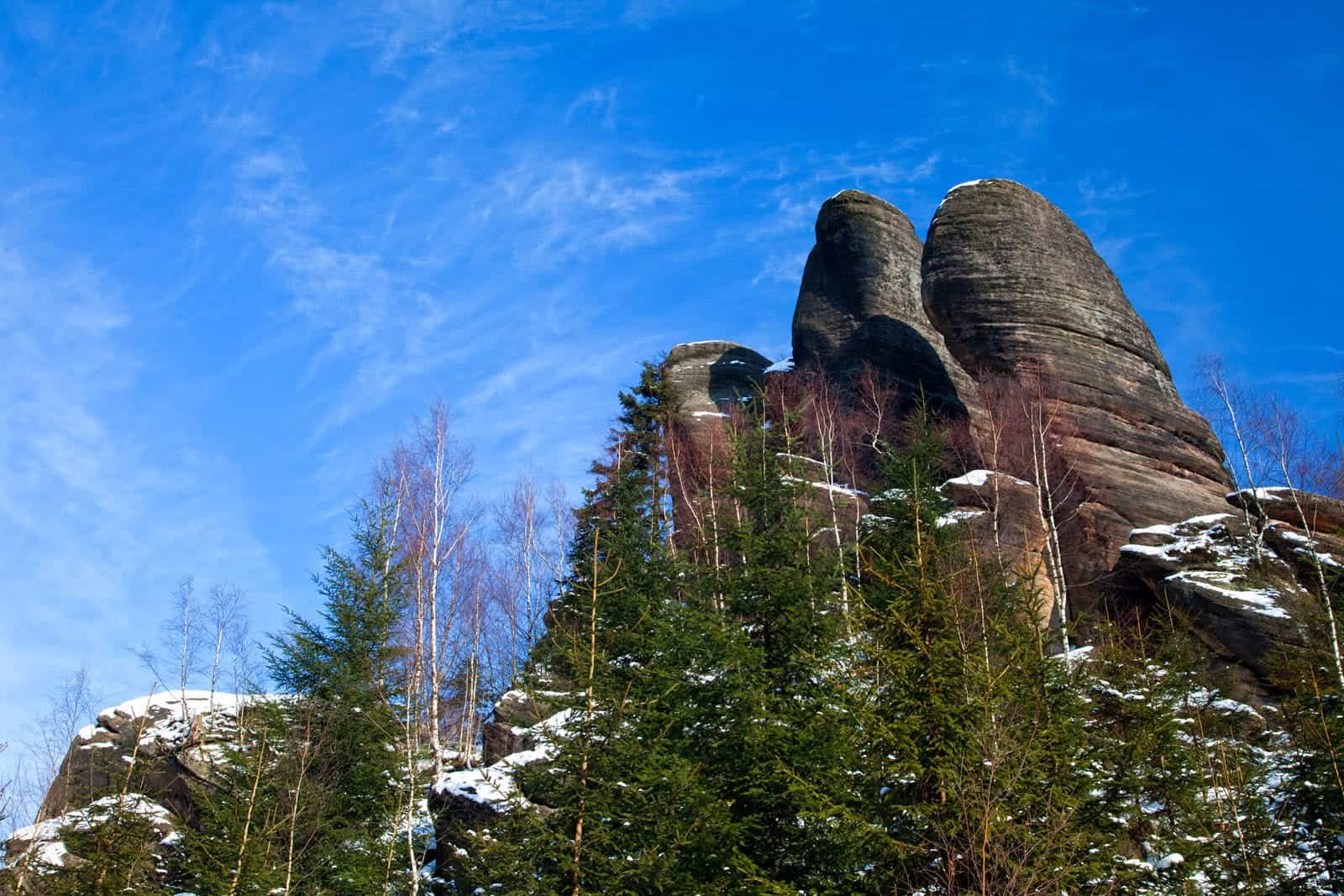 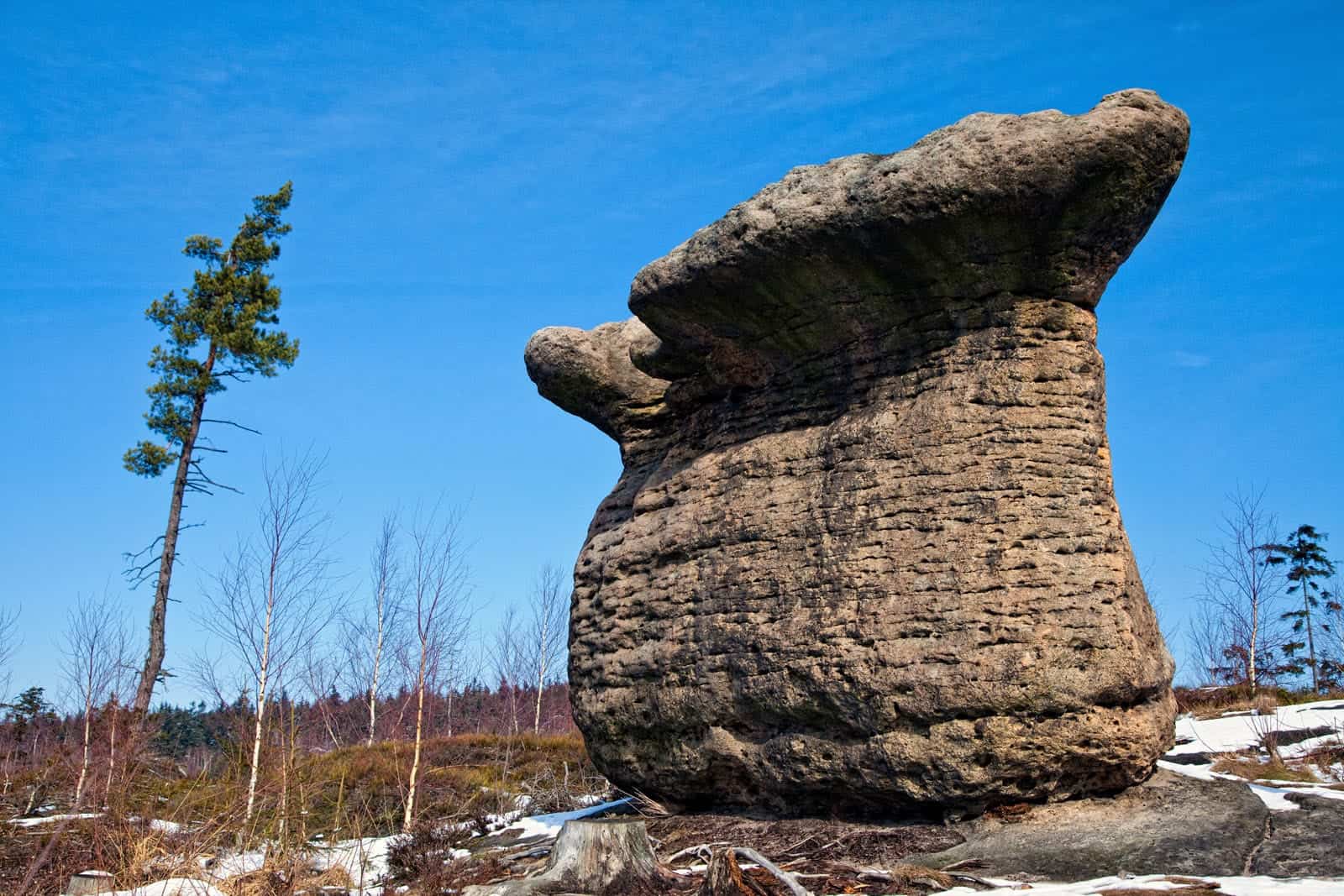 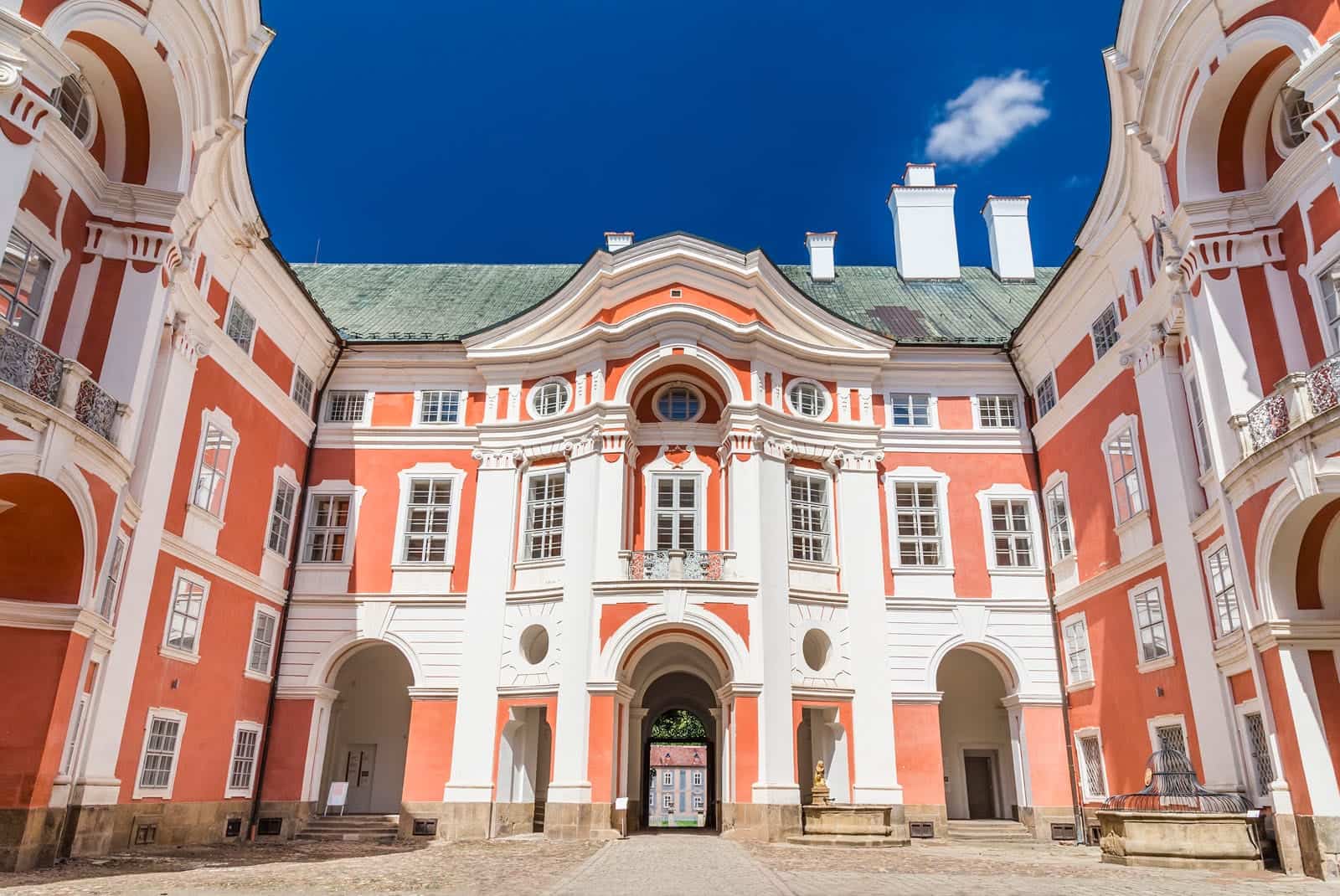 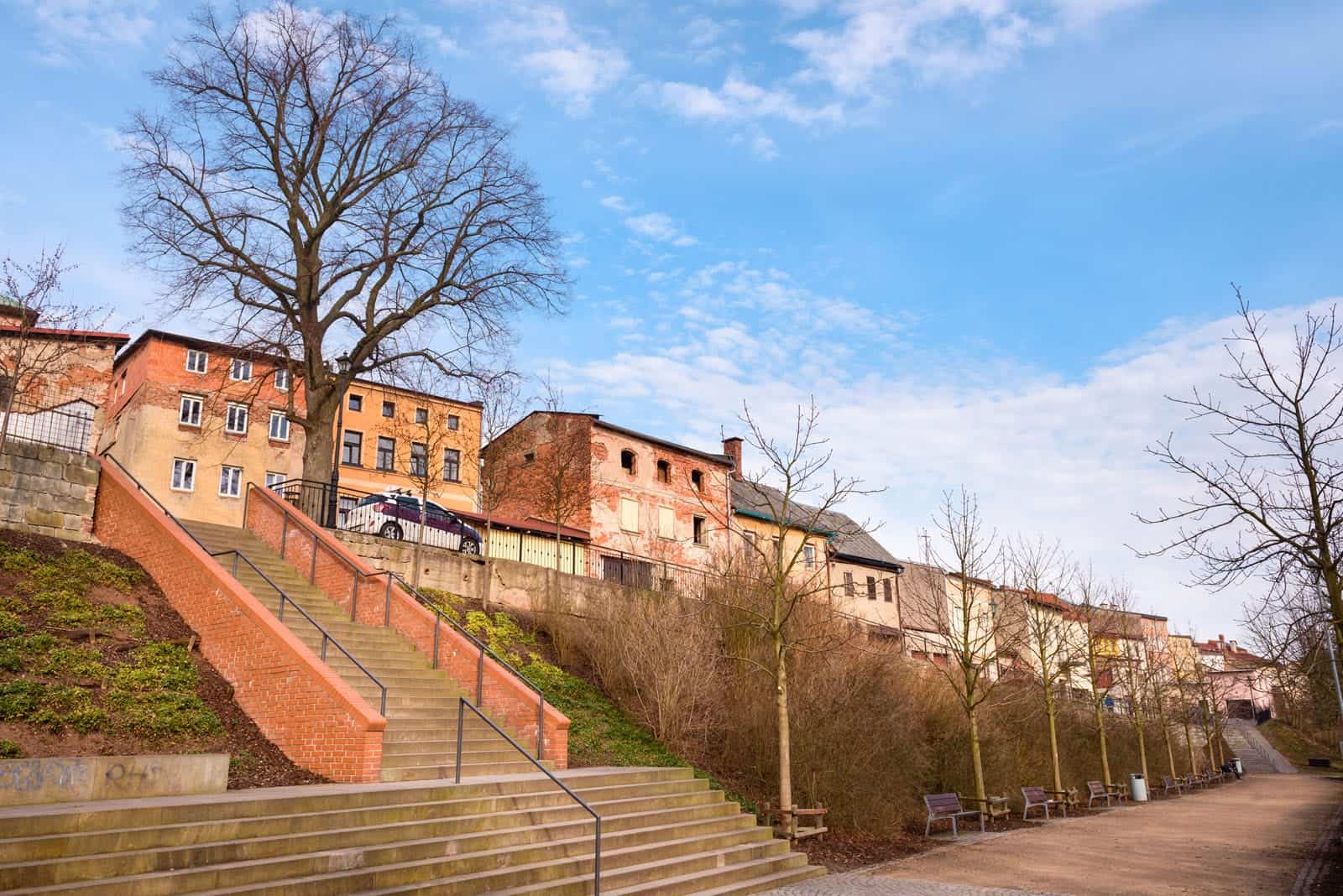 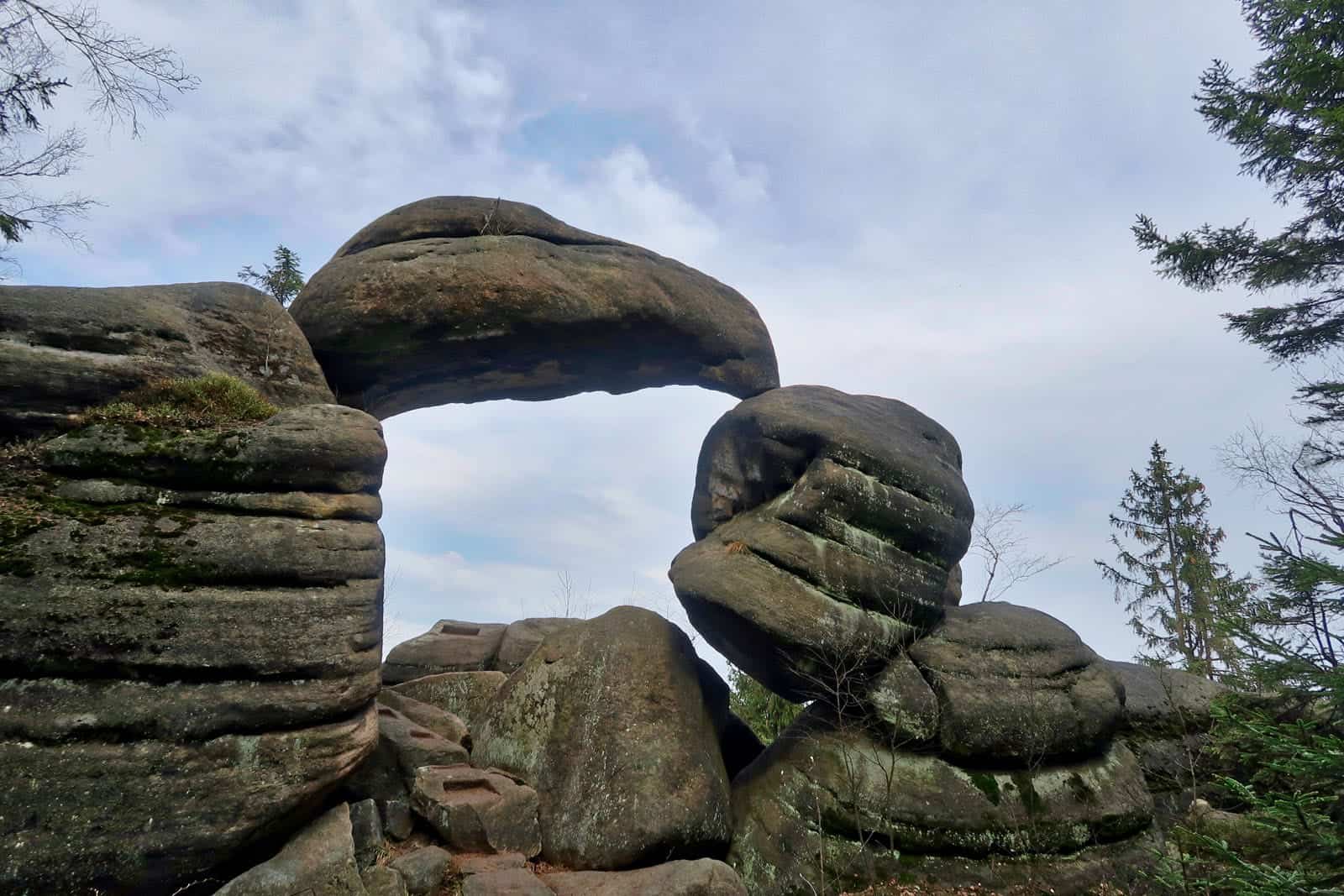 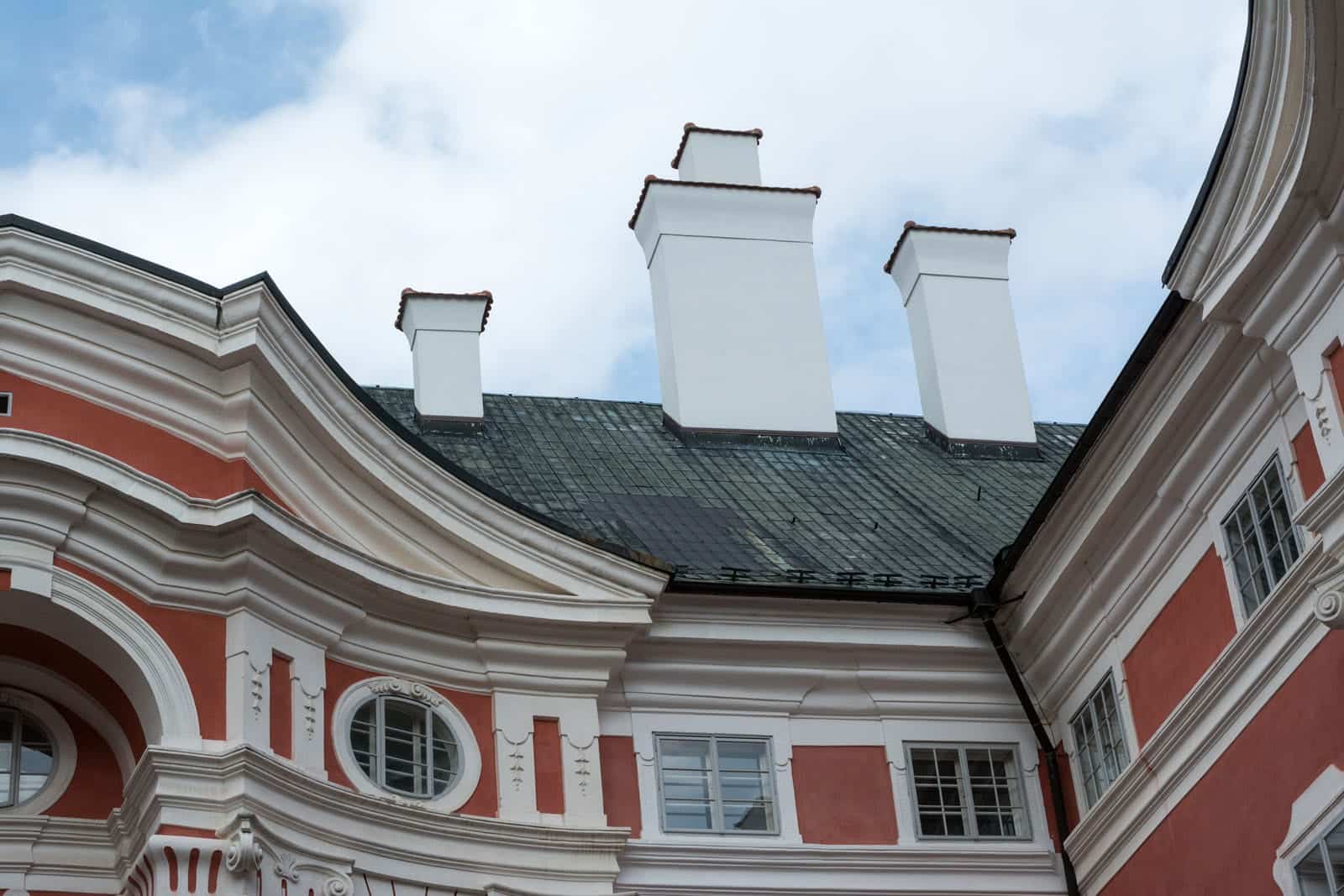 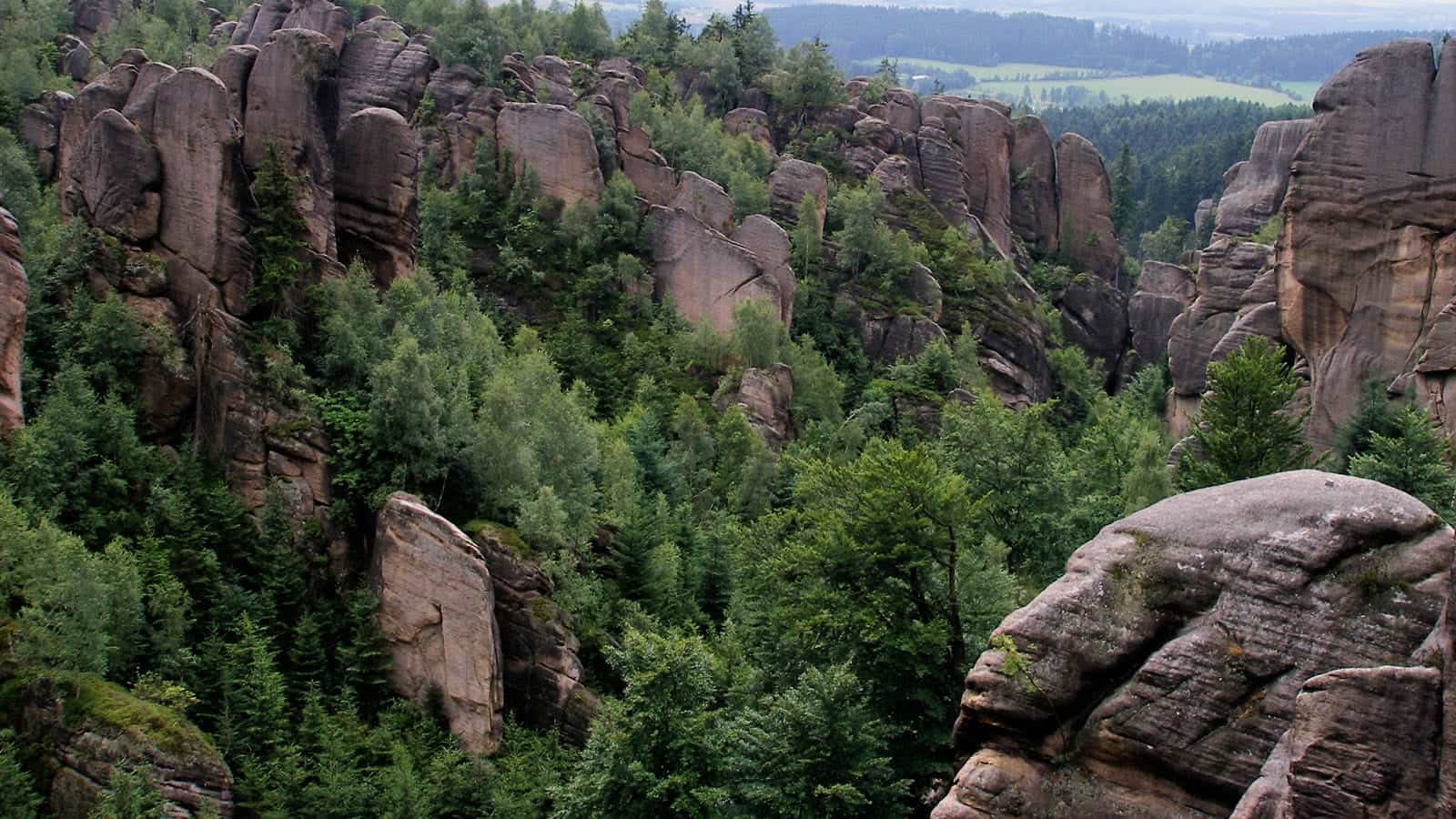 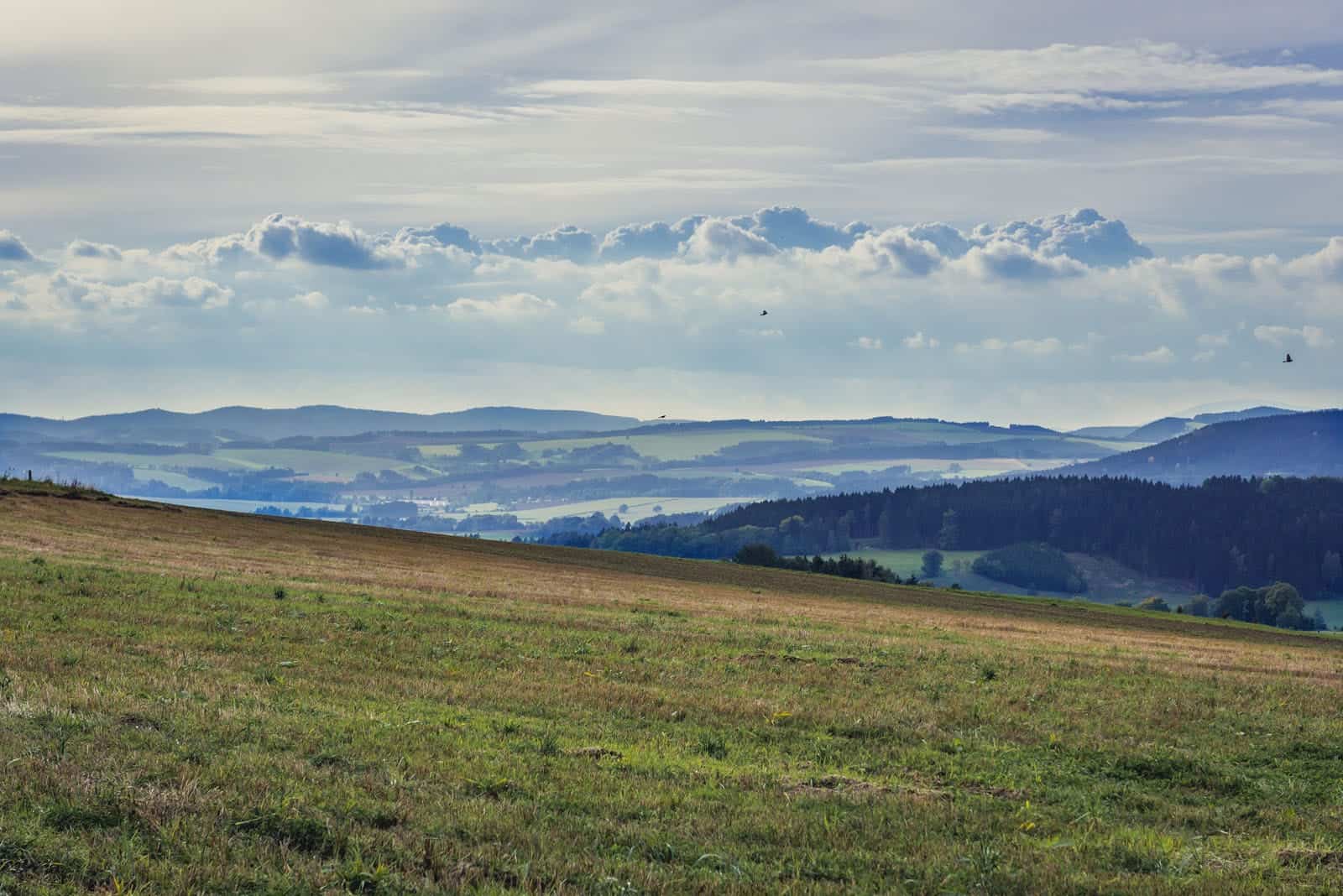 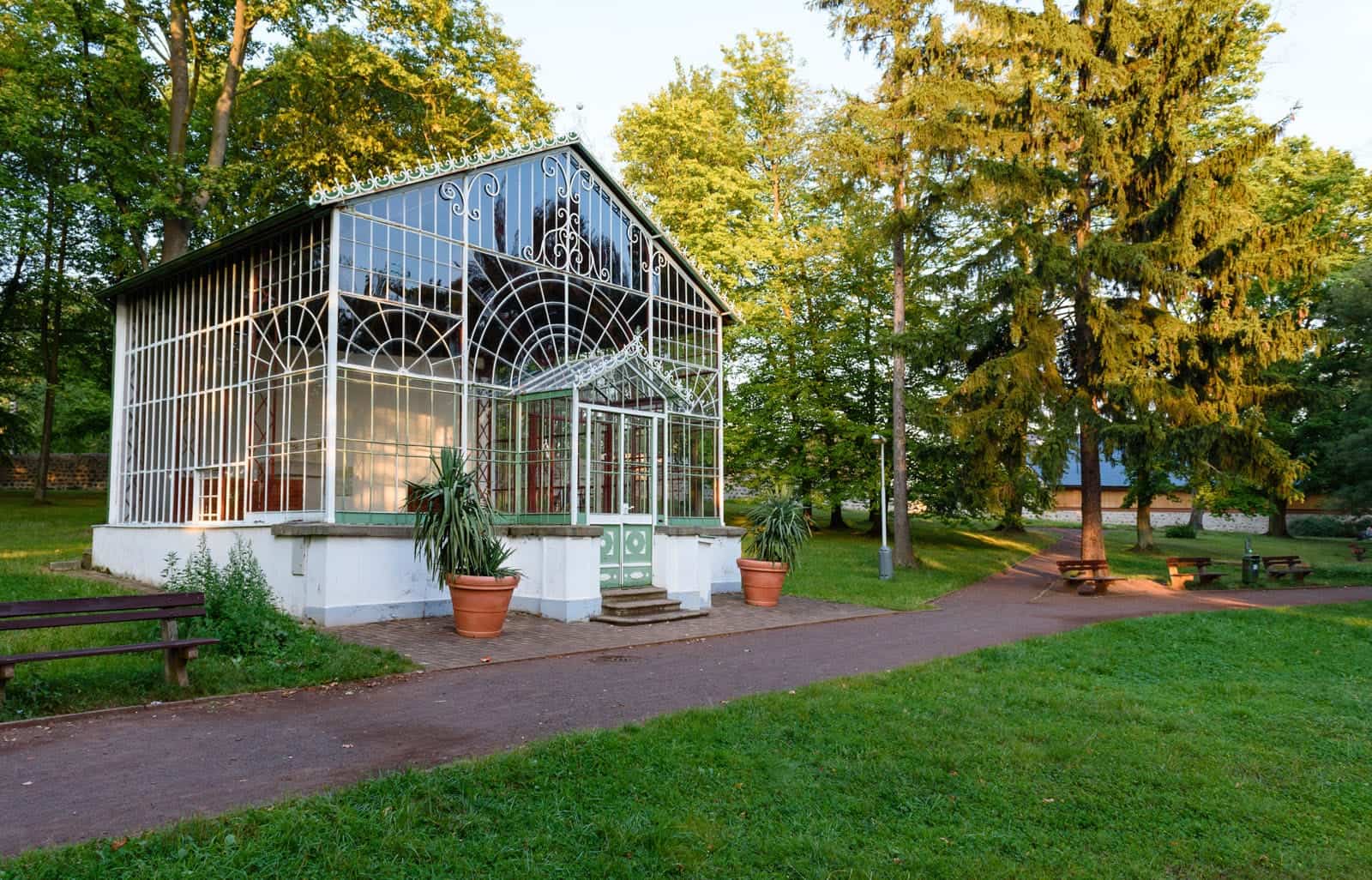 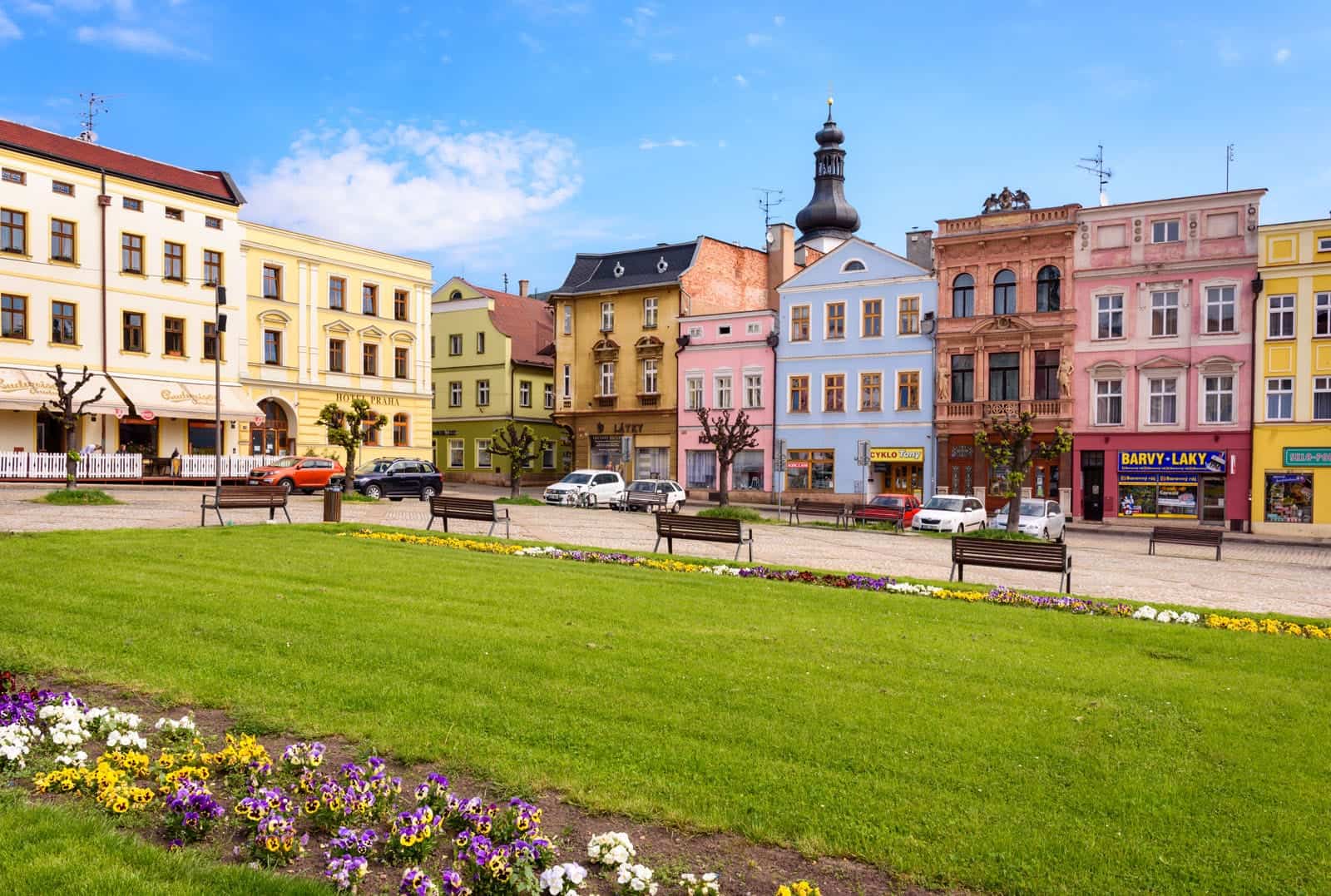 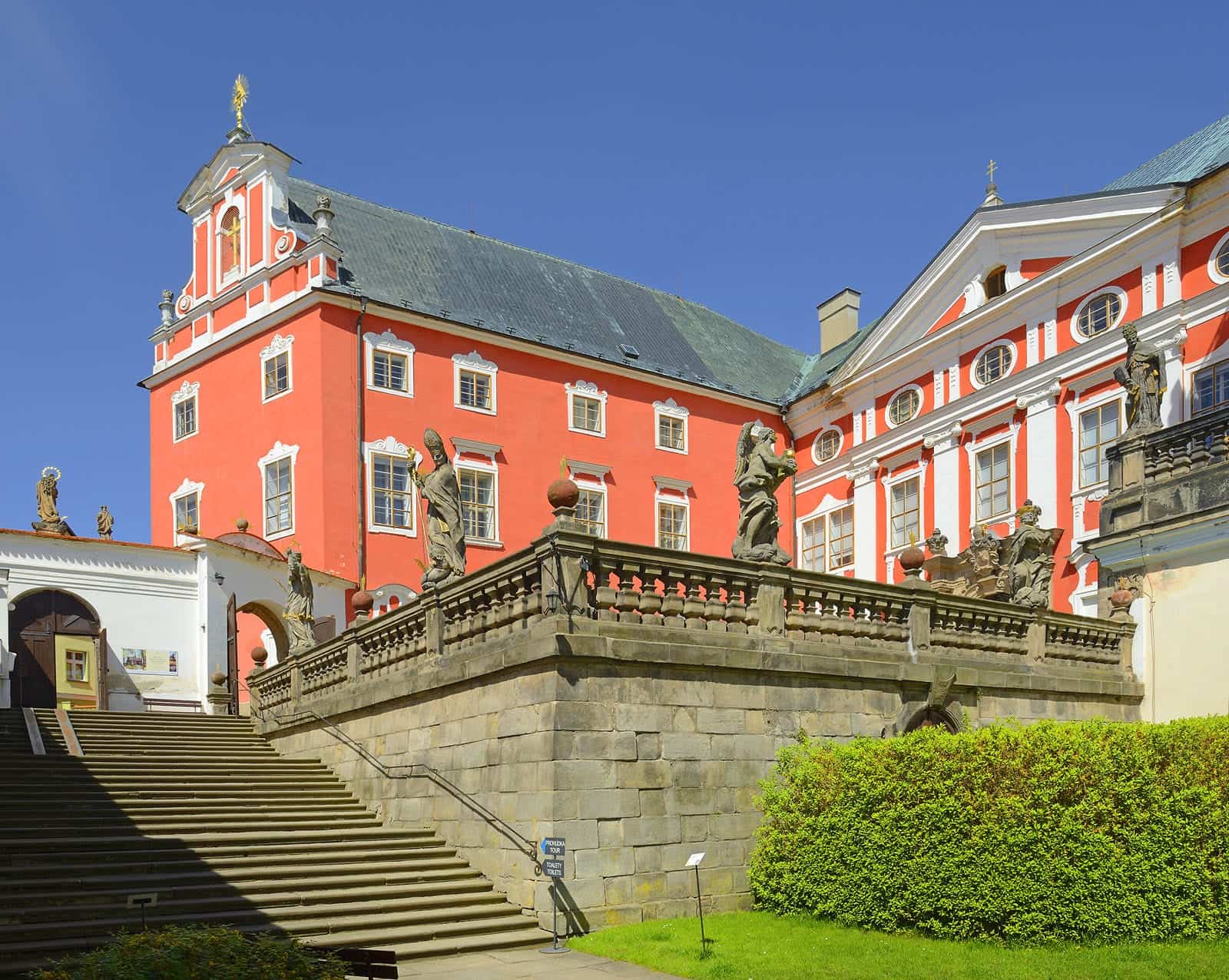 Broumov - the city of churches

A total of nine Baroque rural church buildings, listed in the literature under the collective name "Broumov Group", form an extraordinary and in many ways unique monumental and architectural ensemble. The individual buildings of this "group" are highly remarkable architectures. It is necessary to evaluate as well as actively protect the "Broumov group" as a whole of a specific and high cultural-historical significance.  More information

The most interesting parts of the Broumov Walls are accessible by a dense network of marked trails and paths, which allow a relatively comfortable passage of otherwise difficult-to-penetrate terrain. Numerous observation peaks (Hvězda (Star), Supí hnízdo (Vulture basket), Koruna (Crown), Božanov's Špičák and others) provide views not only of the nearby rocky terrain and other surroundings of Police and Broumov regions, but also to the distant horizons with characteristic contours of Krkonoše, Soví mountains, Orlické and Bystřice mountains and across the Polish Kladsko basin to distant Kralický Sněžník and Jeseníky.

The most visited part of the Broumov Walls is Hvězda (671 m above sea level), which is also a great crossroads of hiking trails. The attraction of this place is not only the view of the Broumov basin with the border mountains in the background, but also the famous Baroque chapel, built in 1732-33 according to the plans of K. I. Dientzenhofer and a popular tourist chalet built in Swiss style.  More information

Teplice rock town is formed by distinctive rock walls. It is separated from the Adršpach Rocks by a deep Wolf Gorge. The rock town is divided into the Skalský Ridge with the highest peak of Skála (Rock - 694 m), the Čáp (Stork - 786 m), the Vulture Rocks (771 m) and the Kraví Mountains (734 m) and the extensive Maze Ridge.

The Teplice rock town is situated along Skalní potok (Rocky steam). There are about 70 named rock formations. All over the area there is a chargeable sightseeing tour for the tourists.  More information

From Teplice rocks with which it forms a continuous plateau, the Adršpach Rocks are separated by a 7 km long canyon Vlčí rokle (Wolf's Gorge). You will find up to 90 meters high rock towers, deep gorges, a waterfall and also 2 lakes. Nearby, there is the spring of Metuje River, which flows through the entire rock town. More information 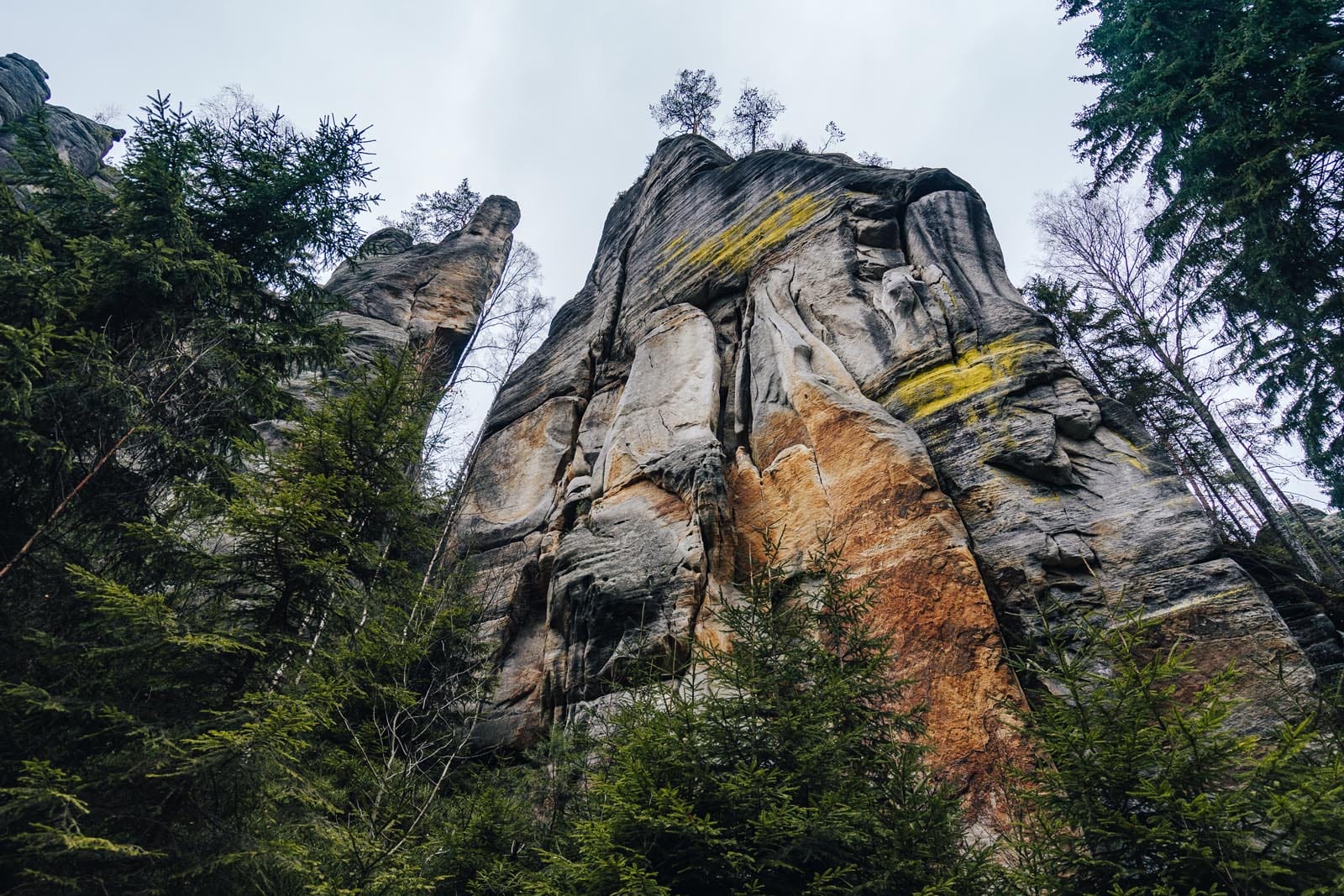 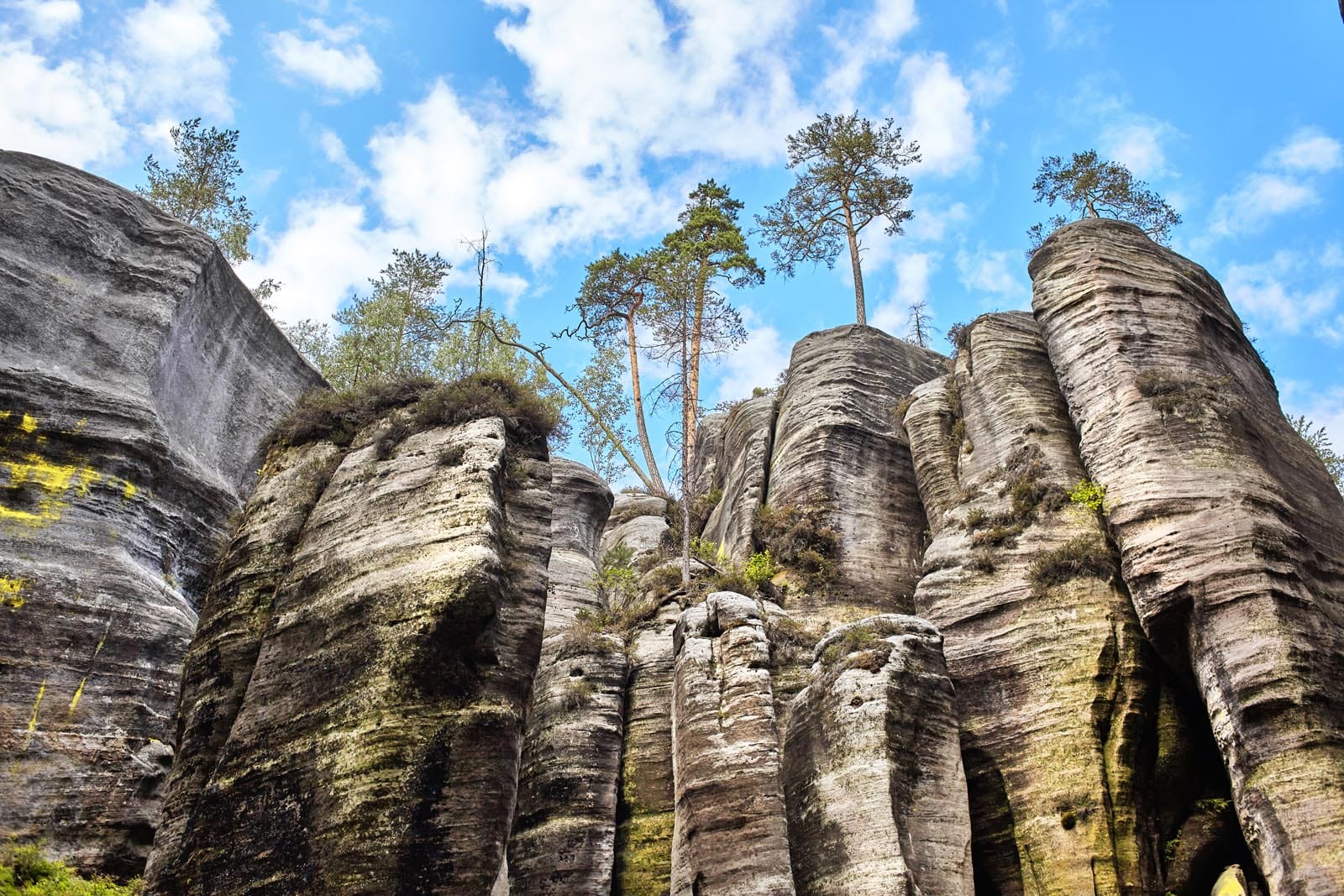 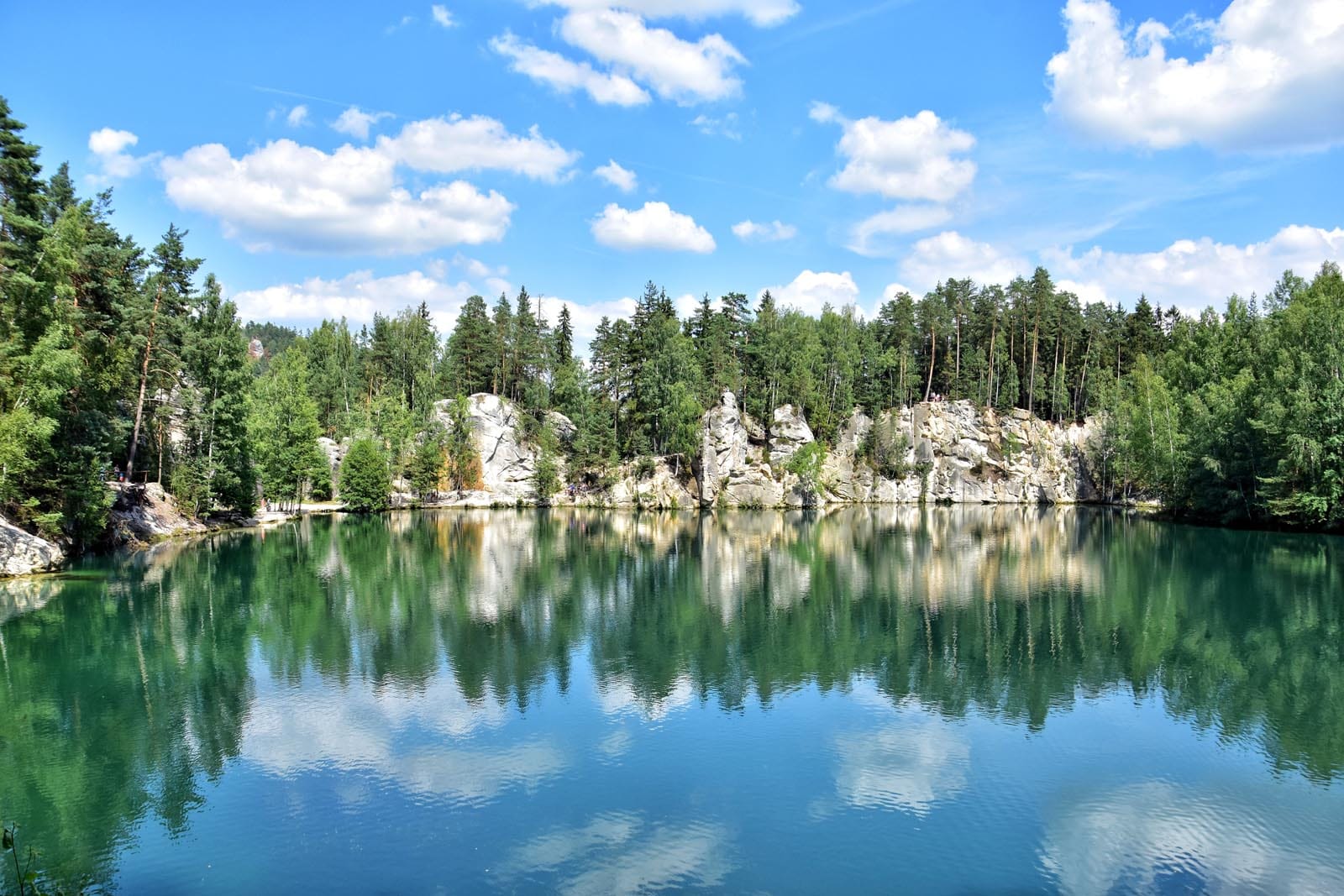 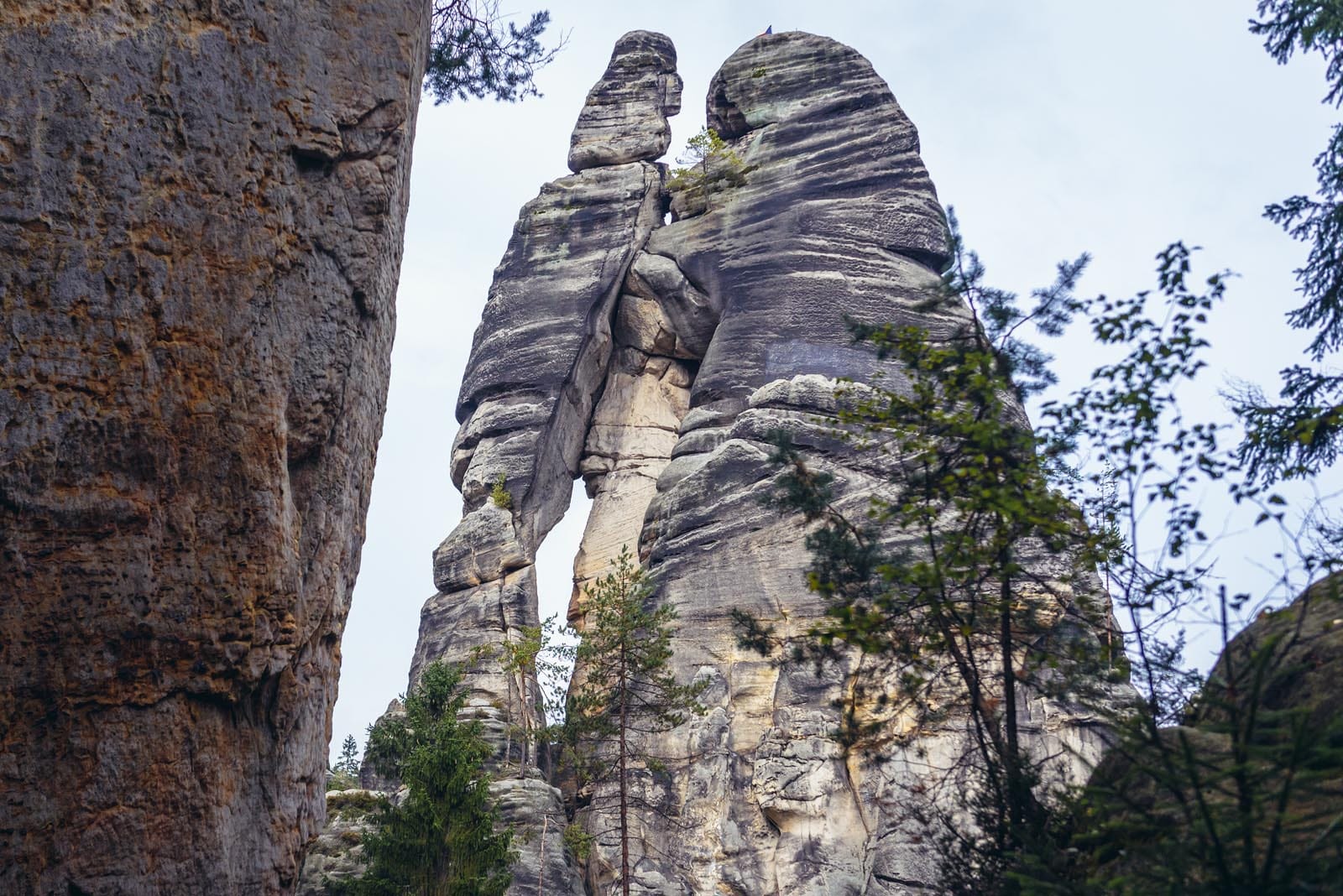 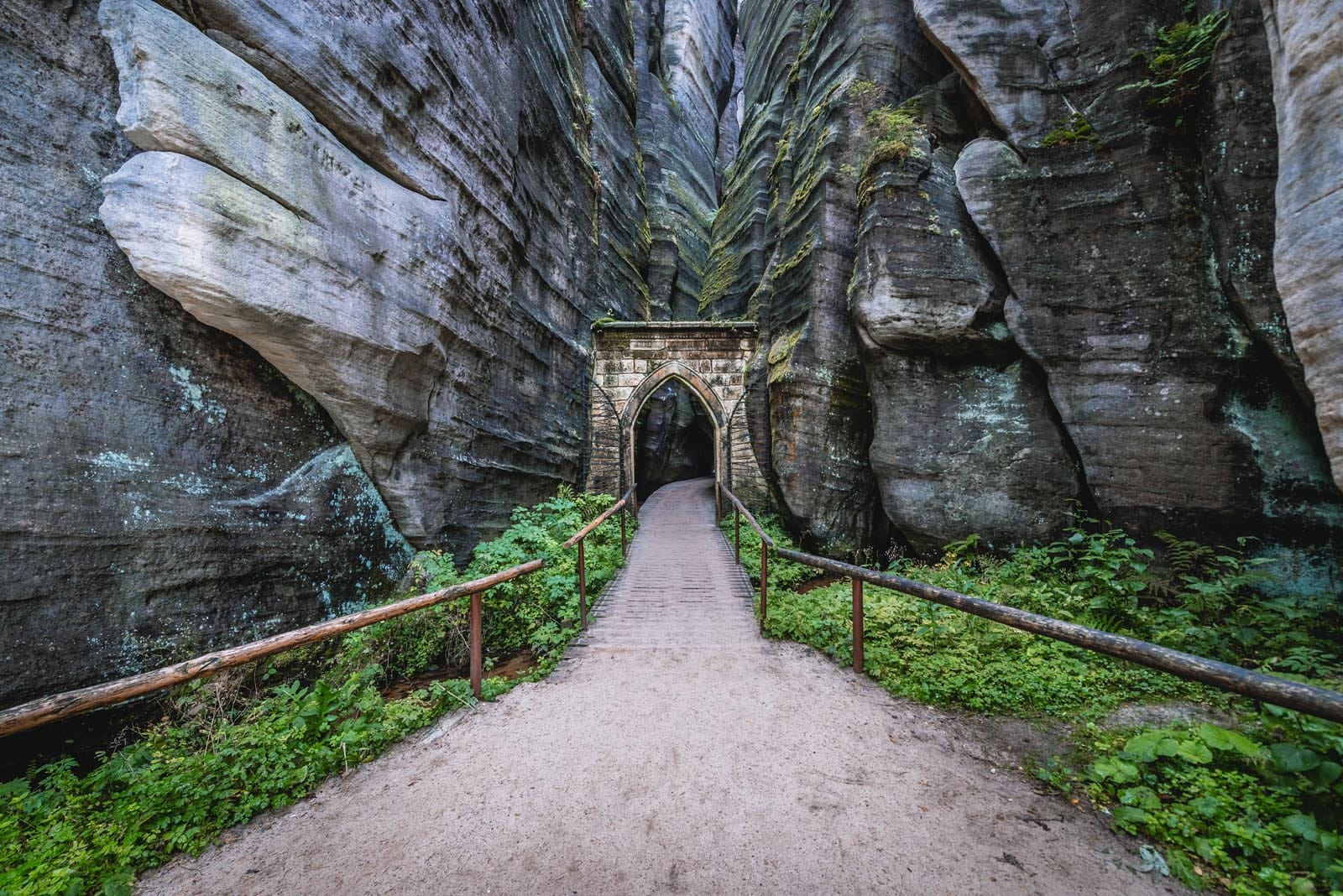 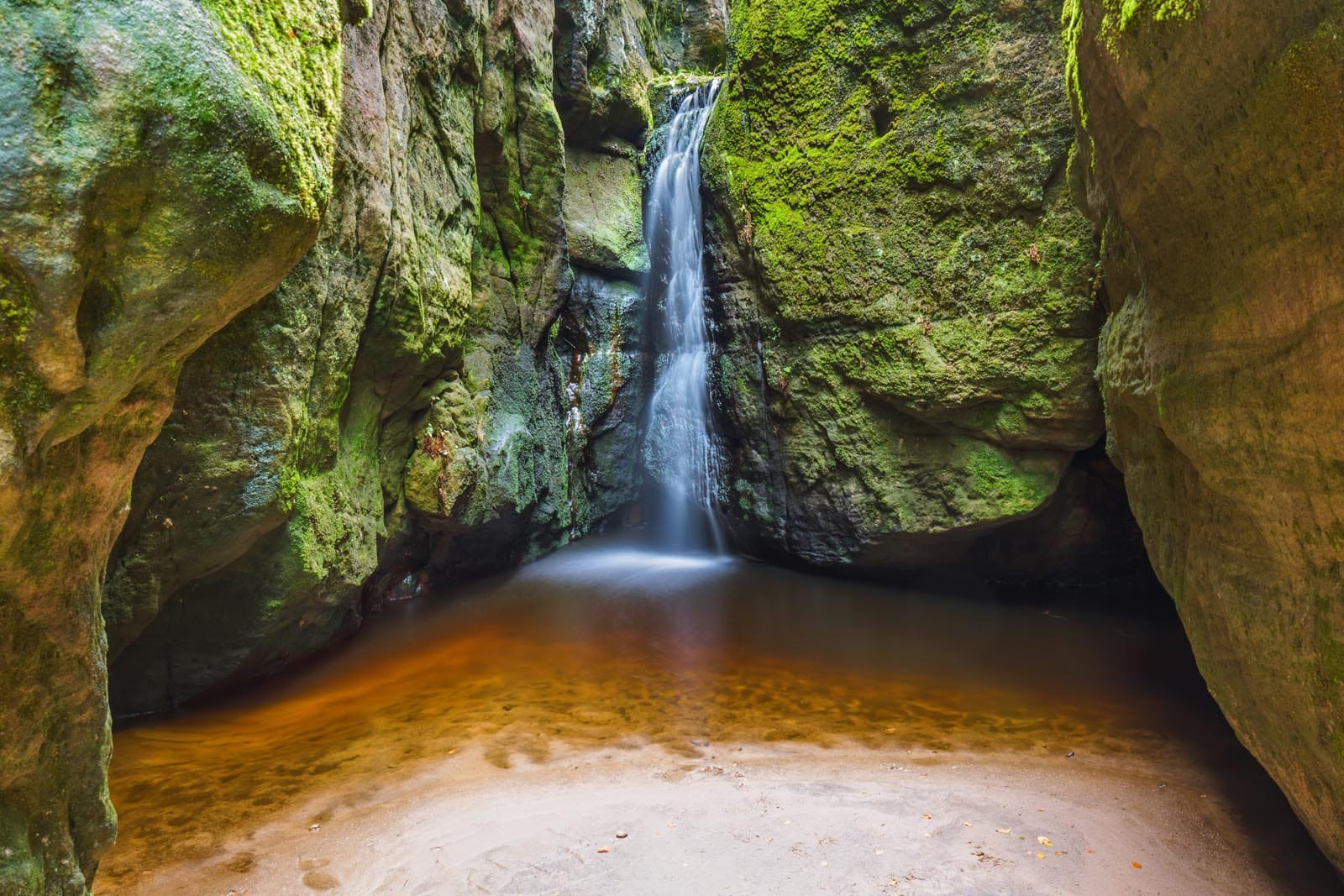 On the top of Ostaš there is a viewpoint Frýdlantská skála with a view of the Jestřebí Mountains, Adršpach-Teplice Rocks, Krkonoše, Javoří Mountains and Broumov Walls. There is a rock maze with bizarre rock formations on the southern and eastern edges. On the northeast slope of the mountain there is also the smaller rock town called the Cat Rocks.  More information

Adršpach-Teplice Rocks, with its hundreds of isolated and bizarre rock towers, are popular climbing terrain. Local climbing has a long and colorful history. The first ascents in Adršpach were carried out in 1923 by the members of the German club K.V.Lössnitz, who were able to climb some of the dominant rock towers (King, Battlement, Saxon Head, Martinská Koruna, Lovers, Mayor or Eagle).  More information 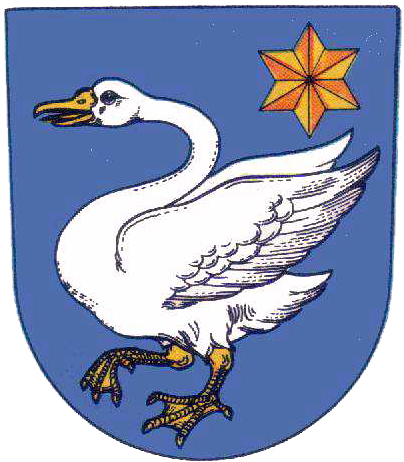 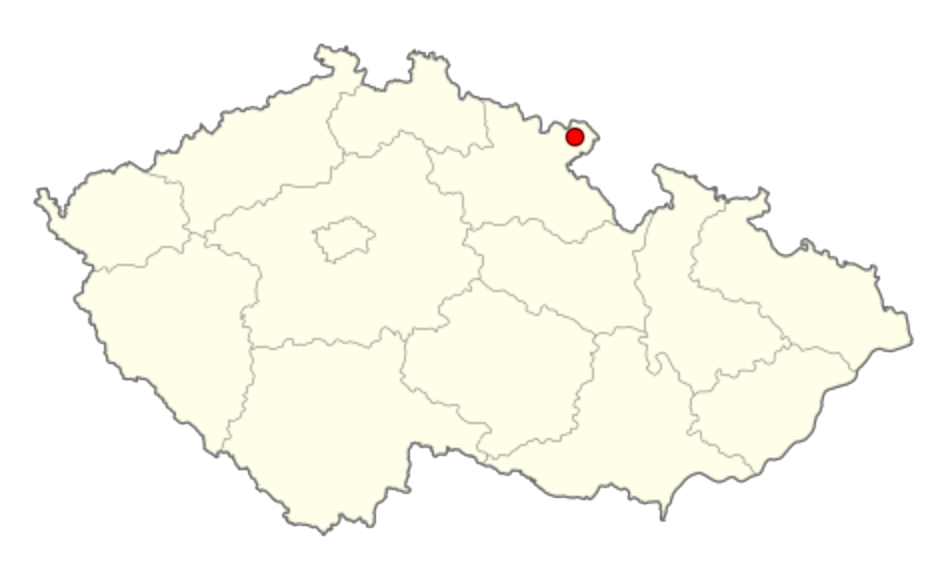